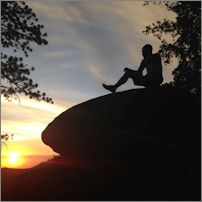 Terry K.’s writing on the subject of intentional, small-space living has appeared in Salon, Yahoo! Finance, Business Insider, LA Weekly, MSN, and The Good Men Project, and on his blog, www.theofficehobo.com. Terry, who has lived in many odd spaces–his office, his truck, a converted barn–has given interviews on the topic for Fusion TV, CBS News, WGN Radio, La W Radio, The Penny Hoarder, and Business Punk Magazine, as well as performing as a keynote speaker at the 2016 Tiny House Jamboree. His chapter in Turning Tiny examines the taboo of odd-space living for urban professionals and the trials and tribulations of striving to lead an ordinary life despite living in an extraordinary space.